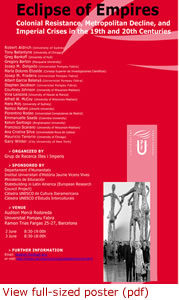 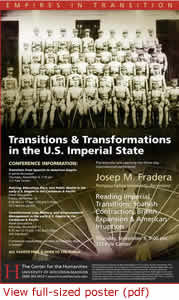 With seed funding from the Goldberg Center and UW’s Division of International Studies, two members of the Goldberg Center, Alfred McCoy and Francisco Scarano, have convened a series of conferences and publications on “Transitions & Transformations in the U.S. Imperial State.” Ultimately, this four-phase project, involving a collaborative effort by some 130 scholars from four continents, is inverting the conventional optic by bringing the perspective of foreign area studies to bear upon the United States. This work is contributing to a fundamental re-conceptualization of American state formation, the U.S. ascent to global power during the 20th century, and the ongoing decline of Washington’s global reach in the 21st century.

From 2004 to 2010, this project convened a series of seminars, working sessions, and conferences. These meetings have culminated in a major international conference at Madison in 2006, a two-day symposium at Sydney University under the rubric of the World Universities Network (WUN) in 2008, a two-panel session at the International Conference on the Philippines (ICOPHIL) at Manila in 2008, and, in June 2010, a two-day conference at Pompeu Fabra University in Barcelona titled “Eclipse of Empires.”

After a year of preparatory seminars funded by the Mellon Foundation in 2005, our working group of professors from six academic departments here at UW-Madison convened a major international conference on “Transitions in the U.S. Imperial State” in November 2006 that attracted 50 scholars from four continents for three days of deliberations. Next came a follow-up conference at Sydney University in 2008 sponsored by the World Universities Network (WUN) that attracted 60 scholars from Australia and New Zealand.

Building upon these two meetings, this “Empires in Transition” project published a volume with 47 essays titled Colonial Crucible: Empire in the Making of the Modern American State (Madison: University of Wisconsin Press, 2009). In its first year of publication, this volume has sold over 1,500 copies, been reviewed in leading journals, and been adopted for courses at universities nationwide. Our presentation of these findings International Conference on the Philippines (ICOPHIL) at Manila in 2008 sparked a lively discussion in two panel sessions and attracted audiences of 120 and 150 respectively to two related seminars at the Diliman and Manila campuses of the University of the Philippines.

Indicating the overall significance of this effort, Professor Marilyn Young, the president of the Society for Historians of American Foreign Relations (SHAFR), published a strongly positive review of the project’s first volume, Colonial Crucible: Empire in the Making of the Modern American State, in the Pacific Historical Review (August 2010, Vol. 79, No. 3) which begins:

“Colonial Crucible should end any discussion as to whether the category ’empire’ applies to the United States. In this exceptionally coherent set of essays, the editors make good their subtitle, for this is the most exacting account that one could wish about the way in which empire made America and, in particular, the American state. The book, appropriately, is dedicated to William Appleman Williams, whose early challenge to the complacency of American exceptionalist historiography Colonial Crucible honors and extends.”

In June 2010, our working group convened a third international conference at Pompeu Fabra University in Barcelona under the title “Eclipse of Empires: Colonial Resistance, Metropolitan Decline, and Imperial Crises in the XIX and XX Centuries.” Through a collaborative effort between scholars at UW-Madison and Pompeu Fabra University, we submitted a proposal to the Ministry Education in Madrid that won the rating of “A” and Spanish government funding for this gathering of 30 leading scholars from Australia, America, Asia and Europe. Drawing on the conference papers, the “Empires in Transition” project published, in October 2012, a edited volume with 25 contributors analyzing the dynamics of decline among five global empires–British, French, Portuguese, Spanish, and American–under the title, Endless Empire: Spain’s Retreat, Europe’s Eclipse, America’s Decline.

To bring these findings to a wider public audience, portions of the introductory and concluding essays in Endless Empire have been published as on-line essays on multiple websites, including History News Network, Huffington Post, Salon.com, and TomDispatch. To read these essays by Alfred McCoy, please see :